The front-month NBP and TTF contracts rallied by over 2% on Wednesday to settle at the equivalent of USD 19.22/MMBtu and USD 19.15/MMBtu respectively.

Pipeline flows from Norway fell from 282 MMcm/d on Tuesday to 263 MMcm/d on Wednesday, according to EnergyScan, with the decline due to planned maintenance at the giant Troll gas field. The slump in supply is adding to ongoing concerns over Europe’s gas storage levels, with the winter storage withdrawal season starting next month.

Reports suggesting Gazprom will start operations on its Nord Stream 2 pipeline on 1 October failed to exert any downward pressure on European gas prices.

The rally saw the European gas benchmarks extend their premium over Asian LNG marker JKM, which recorded a minor loss to settle at USD 18.65/MMBtu.

In the US, gas benchmark Henry Hub brushed off the loss recorded on Tuesday to hit a seven-year high on Wednesday. The front-month Henry Hub contract soared by 7.6% to close at USD 4.91/MMBtu.

Like Europe, low gas inventory levels in the US are supporting gas prices, with US Gulf of Mexico gas and oil production outages aiding the rally. Production is being slowly restored, following Hurricane Ida which made landfall on 27 August.

As of Wednesday, ~77% of US GoM oil and gas production remained offline, according to data compiled by the US Bureau of Safety and Environmental Enforcement (BSEE).

The GoM production outages helped lift crude prices on Wednesday. Brent and WTI were up over 1% to close at USD 72.60/barrel and USD 69.30/barrel respectively. 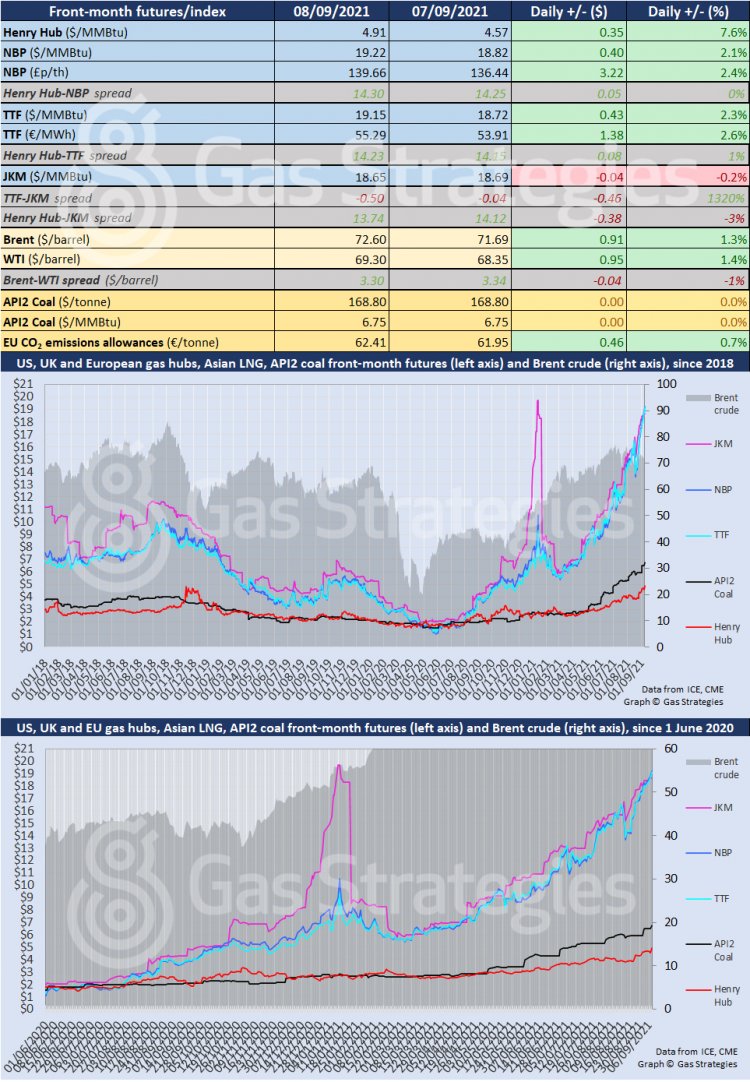