European gas prices continued to surge on Wednesday, with TTF closing the gap on Asian LNG marker JKM after settling at the equivalent of USD 10.11/MMBtu – the Dutch marker’s highest close since September 2018.

The front-month NBP and TTF contracts rallied by ~2% on Wednesday, with the UK benchmark settling at the equivalent of USD 9.78/MMBtu and TTF breaking into the USD 10/MMBtu range.

European gas prices have been rallying on a tight supply outlook, with pipeline flows from Norway falling on Wednesday due to planned maintenance. LNG flows also remain tight. As for demand, it is expected to remain buoyant due to warm weather and lower wind power generation.

The rally helped lift the front-month JKM contract and the European carbon price. JKM rallied by 0.5% on Wednesday to close at USD 10.9/MMBtu – its highest close since 20 January – however the rally by TTF saw JKM's premium over the Dutch marker cut to USD 0.79/MMBtu on Wednesday.

The European carbon price closed in the EUR 53/tonne range for the first time since 26 May, with Wednesday’s rally also prompted by the strengthening European coal price. The front-month API2 contract closed at USD 108.25/tonne on Wednesday, with the price rallying on supply tightness and strong demand in Asia.

In the US, gas benchmark Henry Hub remained unchanged at USD 3.13/MMBtu. Henry Hub has been rallying on strong demand amid robust LNG and pipeline exports and warmer weather driving domestic demand.

Crude prices remained steady on Wednesday, with Brent remaining unchanged and WTI falling by 0.1%. Prices have rallied since the start of June amid expectations of strong demand in the second half of the year – as many nations lift Covid-19 lockdown restrictions – with OPEC having suggested demand will outstrip supply by the end of the year. 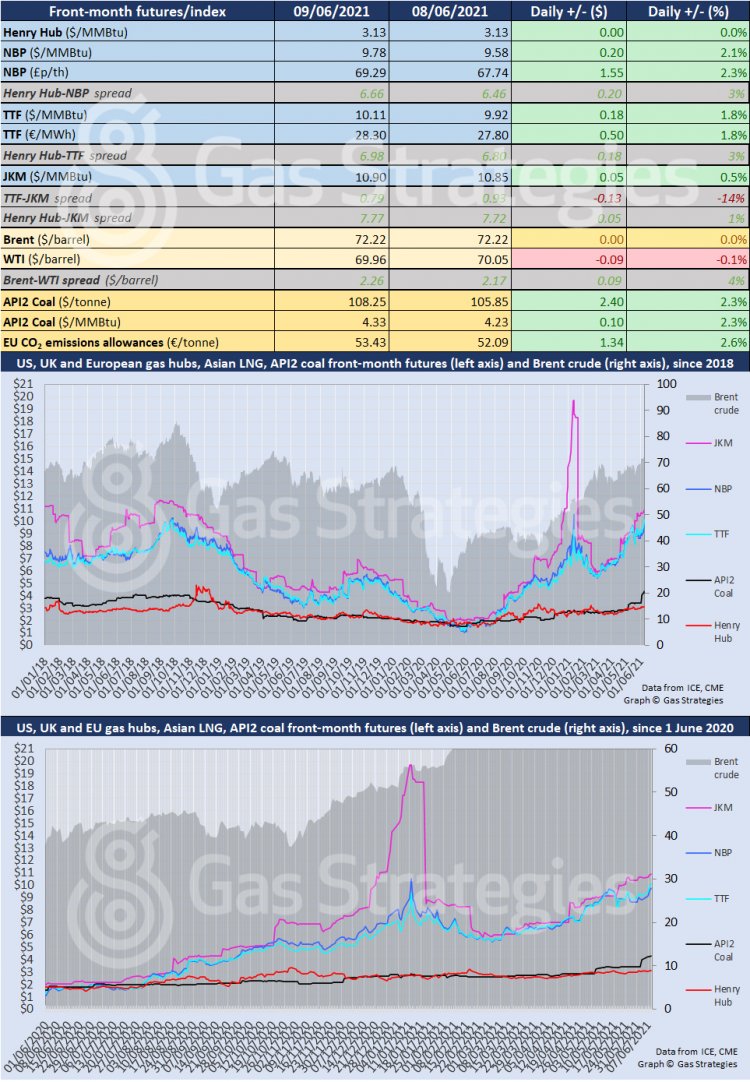