The gas price bull run continued on Thursday, with European gas prices hitting all-time highs and prices in the US hitting seven-year highs.

The front-month TTF and NBP contracts hit fresh record highs on Thursday, with the rally again pinned on weak supply and concerns over gas storage levels heading into winter.

NBP maintained its premium over TTF after settling at the equivalent of USD 19.69/MMBtu – USD 0.08/MMBtu higher than the Dutch gas benchmark.

On Friday morning, Gazprom confirmed that construction of its Nord Stream 2 gas pipeline was fully completed. The announcement is not expected to weigh on prices as completion was expected. However, if flows via NS2 do start in the coming weeks, European gas prices could start to fall. Reports this week have suggested Gazprom is looking to start operations on NS2 on 1 October, however the project still needs to be certified before gas can flow.

Whilst NBP and TTF settled at record highs, Asian LNG marker JKM continued to fall, settling 0.3% lower at USD 18.63/MMBtu. The loss, coupled with the rally by the European gas benchmarks, extended TTF and NBP’s premium over JKM.

In the US, the front-month Henry Hub contract hit a seven-year high after rallying by 10.1% to close at USD 5.03/MMBtu.

Ongoing oil and gas production outages in the US Gulf of Mexico are supporting the Henry Hub rally.

As of Thursday, ~77% of US GoM oil and gas production remained offline, according to data compiled by the US Bureau of Safety and Environmental Enforcement (BSEE). Over 95% of US GoM production was shut-in ahead of Hurricane Ida, which made landfall in Louisiana on 29 August.

The US Energy Information Administration (EIA) released its latest gas storage report on Thursday, which showed a larger than expected injection into US gas storage last week. News of the storage build failed to exert any downward pressure on Henry Hub.

52 Bcf of gas was injected into US gas storage sites last week, a volume much higher than the ~30 Bcf addition expected by analysts. Gas inventories are holding 2.923 Tcf of gas currently, a level ~7% lower than the five-year average, according to the EIA.

Oil prices failed to build on Wednesday’s rally, with prices dipping amid news of China’s plans to release state oil reserves. A smaller than expected draw on US crude storage also weighed on oil prices. 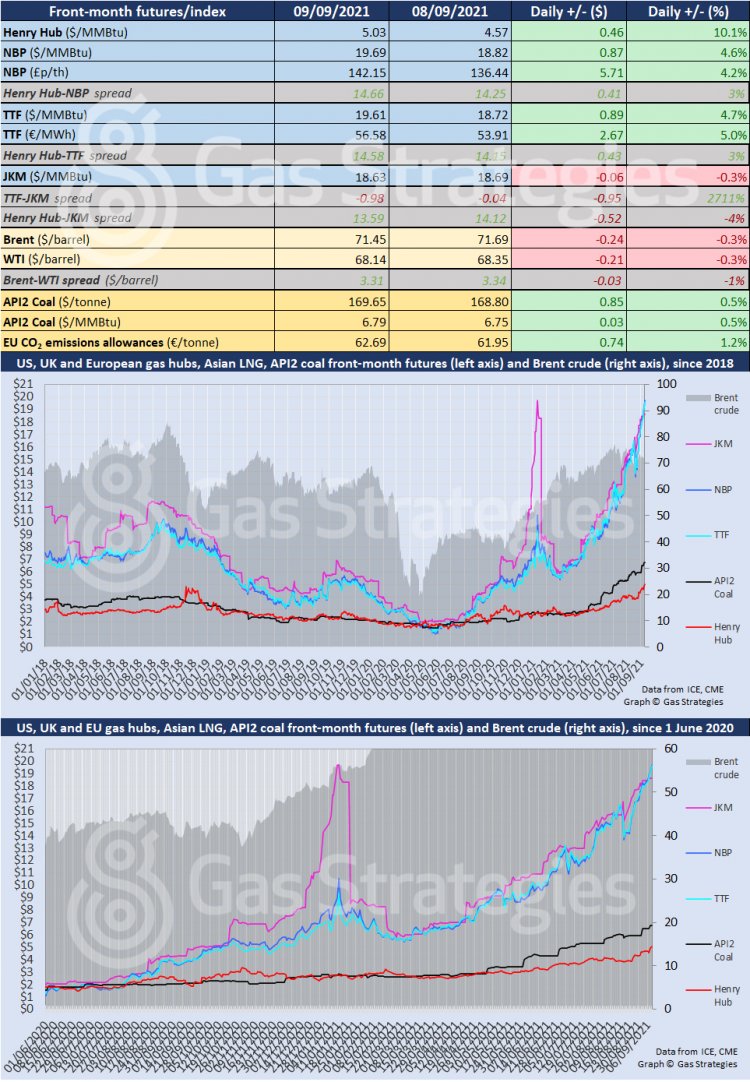