European gas prices continued to retreat on Friday, with TTF and NBP closing at their lowest since 29 September. The result saw Asian LNG marker JKM strengthen its premium over the European gas benchmarks.

The European gas sell off continued on Friday, with the November-dated TTF and NBP contracts falling by over 9% to close at USD 29.71/MMBtu and USD 30.29/MMBtu, respectively.

The loss on Friday saw Asian LNG marker JKM increase its premium over TTF and NBP. The front-month JKM contract fell by 3.1% on Friday to close at USD 32.06/MMBtu – USD 2.35/MMBtu higher than TTF.

JKM’s widening premium could prevent much needed cargoes from heading to Europe. The trade source said LNG imports into Europe have been sluggish in recent weeks and highlighted the fact that it is getting colder in north-east Asia. Additionally, Turkey is in the market for more LNG, according to the source.

The slumping gas – and coal price – in Europe weighed on the European carbon price, which fell 3.4% to settle at EUR 58.29/tonne – its lowest close since 26 August.

In the US, Henry Hub continued to fall amid improving gas inventory levels and mild weather. The front-month Henry Hub contract dipped by 2% to settle at USD 5.57/MMBtu – its lowest close since 29 September.

As for crude, prices continued to tick higher amid growing concerns over tightening supply as demand continues to increase. Oil demand could increase further due to gas prices hovering around record highs, with many market observers expecting gas-to-oil switching to increase over the coming northern hemisphere winter. 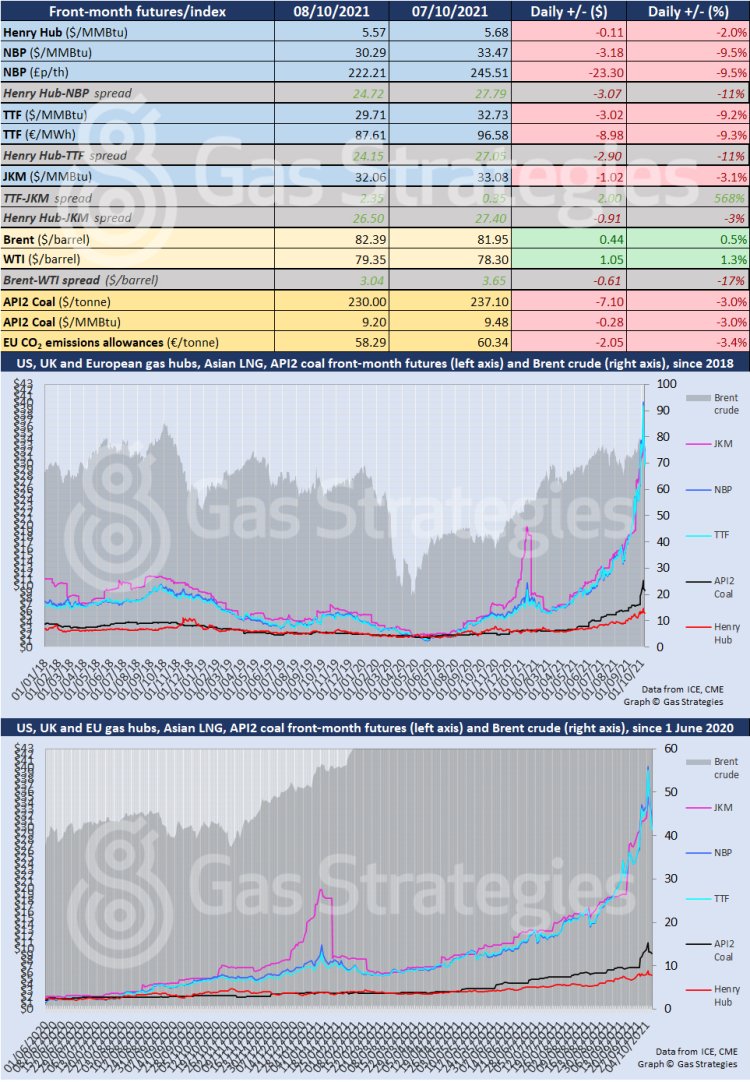