The front-month TTF and NBP contracts jumped by over 7% on Tuesday to settle at the equivalent of USD 22.79/MMBtu and USD 22.84/MMBtu respectively.

The bull run shows no sign of slowing as supply concerns persist ahead of the winter heating season, starting next month. Europe’s gas storage levels are below the five-year average, with pipeline flows from Russia below levels averaged in August and flows from Norway reduced due to planned maintenance. At the same time, gas demand has been lifted in recent weeks due to lower wind power generation – meaning less gas is being directed towards Europe’s gas storage sites.

On Wednesday morning the front-month NBP contract hit a fresh intraday high of GBP 195/th, with TTF climbing to EUR 79/MWh, both approximately the equivalent of USD 27/MMBtu.

The European gas benchmarks have maintained a premium over JKM for the last five days – highlighting Europe’s attempt to attract more LNG. On Tuesday the NBP-JKM spread stood at USD 3.9/MMBtu. The TTF-JKM spread stood at USD 3.85/MMBtu. Whilst the price of the front-month TTF and NBP contracts have jumped by ~30% since the start of the month, the front-month JKM price has increased by ~5%.

In Italy, the government is reportedly looking into reviewing how electricity bills are calculated in a bid to reduce price increases.

Whilst power and gas prices continue to soar across Europe, the European carbon price fell 2% on Tuesday to close below EUR 60/tonne for the first time since 30 August.

In the US, the front-month Henry Hub contract hit a fresh seven-year high, closing 0.6% higher at USD 5.26/MMBtu.

US gas and oil prices have been lifted by production outages in the US Gulf of Mexico following Hurricane Ida which made landfall in Louisiana on 29 August.

Oil prices held steady on Tuesday – Brent was up 0.1%, with WTI recording a marginal gain. 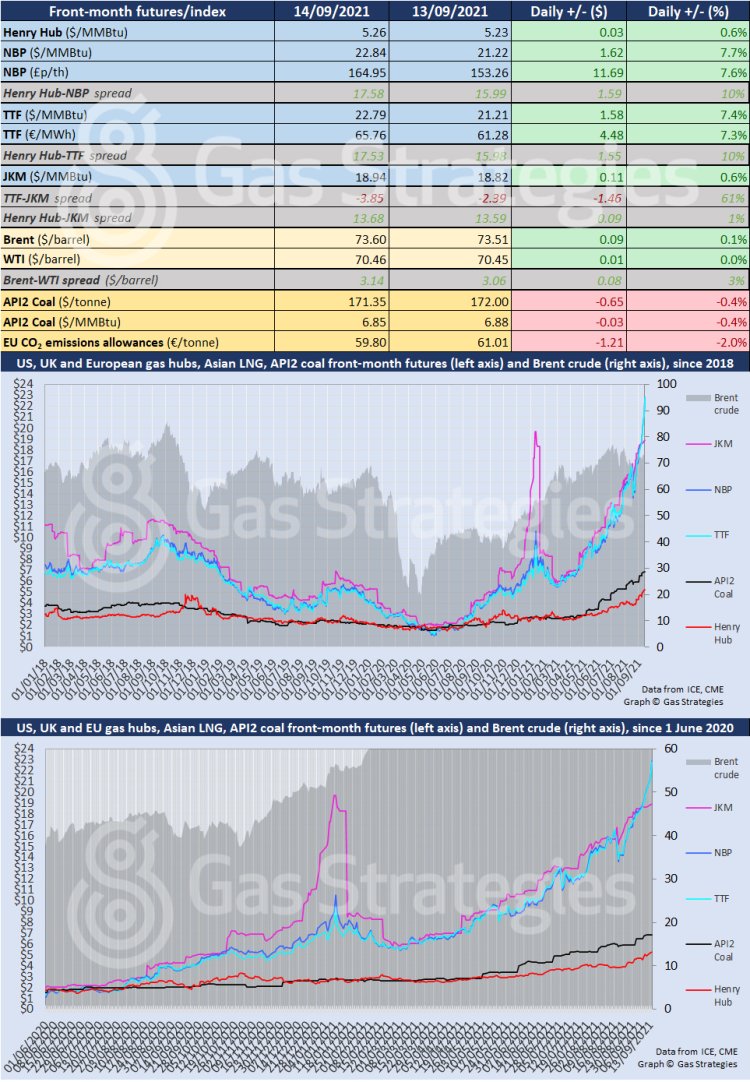