The European carbon price surged to a new record high on Wednesday, with the price lifted by the European Union agreeing a new Climate Law, under which the bloc has agreed to cut carbon emissions by at least 55% by 2030, compared with 1990 levels.

The April-date contract for EU Allowances (EUAs) settled at a fresh high of EUR 45.81/tonne on Wednesday, with the benchmark December 2021 contract hitting a high of EUR 46.50/tonne during trading, before settling at EUR 45.91/tonne.

The carbon price rallied after Brussels announced on Wednesday morning that a final agreement has been reached by the bloc to commit to cutting greenhouse gas (GHG) emissions by at least 55% by the end of the decade, compared to 1990 levels.

The 55% target is much more ambitious than the previous 40% by 2030 target, however the European parliament had previously pushed for a 60% GHG emissions reduction target.

Compliance buying also pushed the carbon price higher, ahead of the 30 April deadline.

European gas prices were mixed on Wednesday, with the bull run ending for NBP. The UK gas benchmark remained unchanged in GBP/th terms, with the price falling marginally in in USD/MMBtu terms. The front-month NBP contract settled at USD 7.36/MMBtu on Wednesday.

As for TTF, the Dutch gas marker continued to rally, however the gains were minor at 0.1%. The front-month contract settled at the equivalent of USD 7.44/MMBtu on Wednesday.

Warmer weather and profit taking capped the gains by the European gas markers on Wednesday.

The front-month Brent and WTI contracts fell by ~2% to settle at USD 65.32/barrel and USD 61.35/barrel, respectively.

Daily Covid-19 cases in India hit a record high of 314,644 on Wednesday, up on the 295,158 cases reported on Tuesday, according to data compiled by the Johns Hopkins University Center for Systems Science and Engineering. In Japan, daily cases increased from 4,973 on Tuesday to 5,369 on Wednesday. 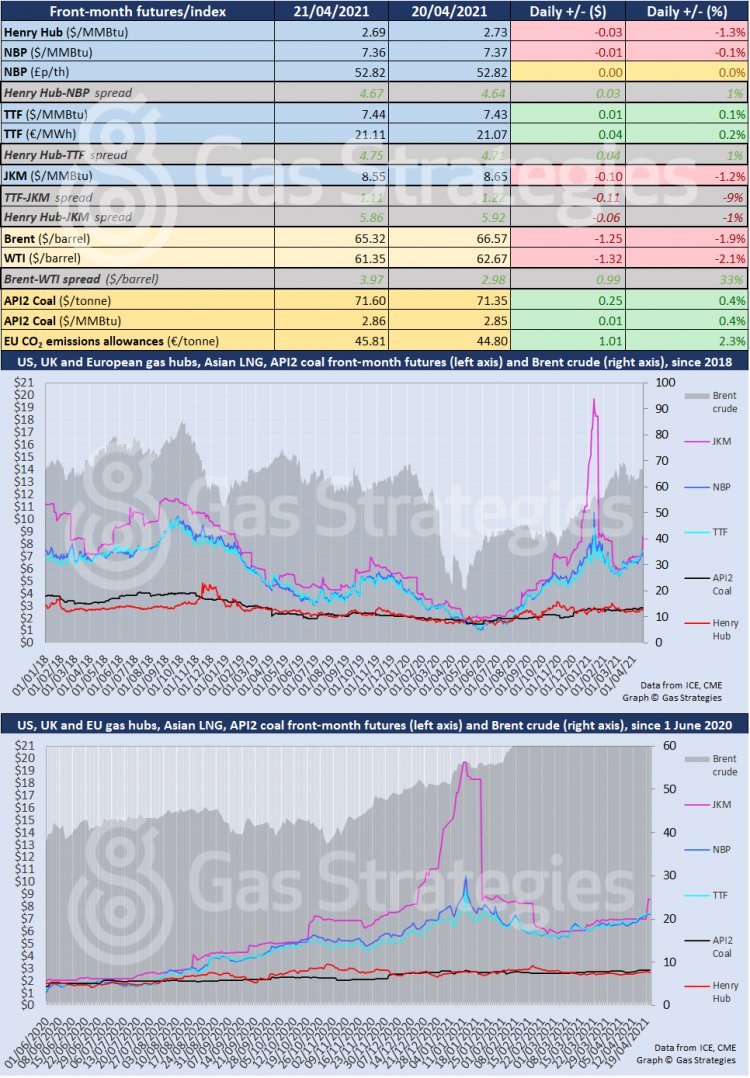