The European carbon price hit a fresh record high on Thursday, however carbon, gas and oil were all falling on Friday morning amid concerns over a new coronavirus variant sweeping southern Africa.

The European carbon price closed 2.1% higher on Thursday to hit a fresh high of EUR 74.46/tonne. EUAs have been lifted by strong buying in recent days, with strengthening gas prices also lending support.

However, the December-dated carbon contract was falling on Friday morning as the market weighed news of a new Covid-19 variant spreading in southern Africa.

Concerns over the variant, known as B.1.1.529, have seen the likes of the UK impose travel restrictions on travellers coming from South Africa, Namibia, Zimbabwe, Botswana, Lesotho and Eswatini.

Cases of the new variant, which some experts have said will make vaccines less effective, have been identified in South Africa, Hong Kong, Botswana and Israel.

News of the variant and subsequent travel restrictions weighed on oil and gas prices.

The front-month Brent contract, which settled marginally lower on Thursday, dipped to USD 77/barrel during trading on Friday morning, with the marker having opened at USD 81.59/barrel. WTI, which opened at USD 77.41/barrel on Friday, dipped to a low of USD 72.69/barrel during morning trading. The US benchmark closed 0.4% lower on Thursday at USD 78.1/barrel.

As for gas, European gas prices fell on Thursday, with NBP and TTF down 0.8% and 0.7% respectively. The UK marker closed at the equivalent of USD 31.13/MMBtu. The Dutch marker settled at USD 30.63/MMBtu.

NBP opened at GBP22.98/th on Friday morning and slid to GBP 224.5/th before starting to pick up later in morning trading. TTF opened at EUR 91.5/MWh, slid to a low of EUR 88.65/th and then started to show signs of a recovery.

As for Henry Hub, JKM and API2 coal, prices remained unchanged on Thursday due to the Thanksgiving holiday in the US. 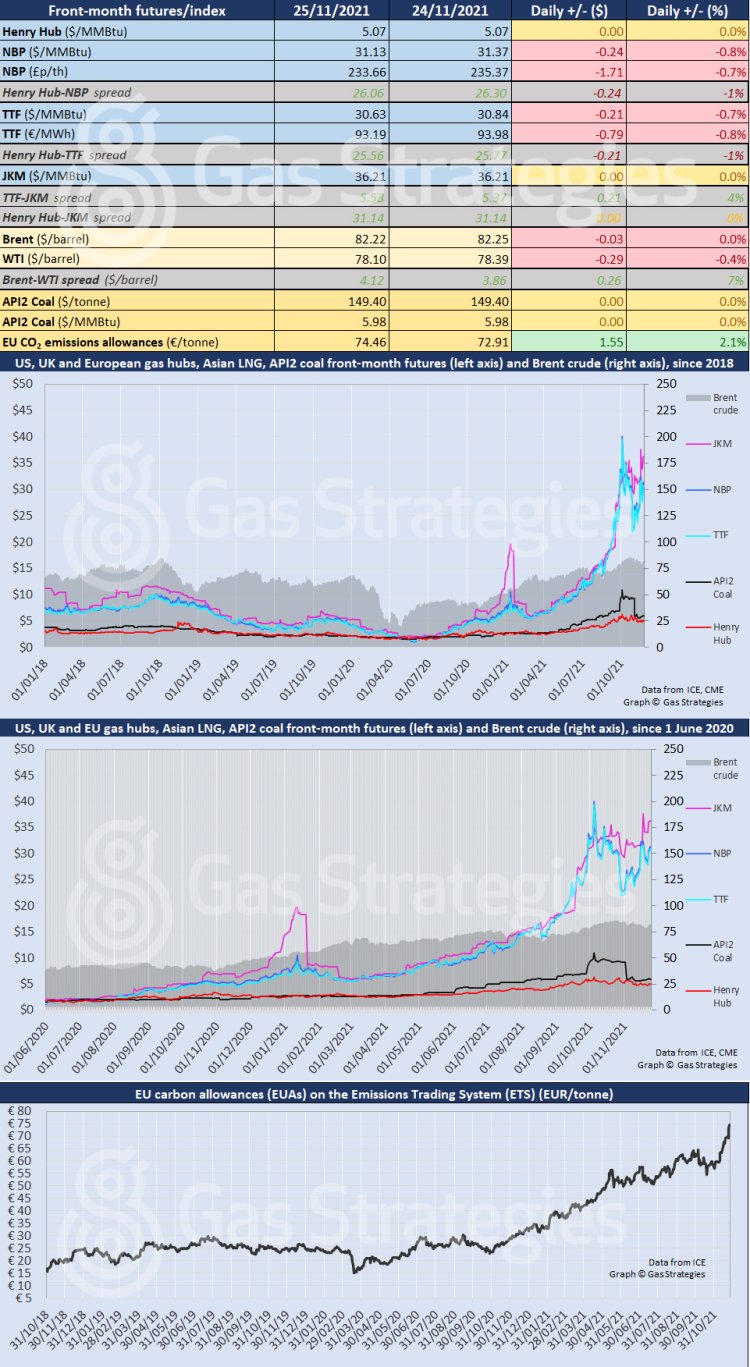