Crude prices slipped on Tuesday, however oil was rallying on Wednesday morning amid expectations that the Organization of the Petroleum Exporting Countries (OPEC) and its allies, a group collectively known as OPEC+, will agree to continue production cuts into May.

Front-month Brent and WTI fell by 1.3% and 1.6% respectively on Tuesday, with prices sliding as transits in the Suez Canal resumed on Monday evening after the Ever Given container vessel was successfully freed from the waterway.

However, prices were ticking higher on Wednesday morning amid expectations that the OPEC+ alliance will agree to sustain production curbs into May, when the alliance meets on Thursday.

OPEC+ surprised the market earlier this month when it announce it would continue with production cuts in April. Market observers had widely expected that OPEC+ would agree to increase production in light of higher prices, however the oil alliance voted against a collective 500,000 barrels/d increase in production starting in April.

With the demand outlook looking bearish due to spiralling Covid-19 cases – particularly in Europe – and the oil price bull run having stalled, OPEC+ is widely expected to show restraint again heading into May.

Supporting the need for a supply-side response is growing US crude inventories. On Tuesday, the  American Petroleum Institute said US oil storage increased by 3.9 million barrels in the week ending 26 March, with the figure significantly higher than the expected 100,000 barrel-build expected by analysts polled by Reuters.

Whilst crude fell, gas rallied on Tuesday. The front-month UK NBP and Dutch TTF contracts recorded gains of 2.1% and 1.5%, respectively.

The month-ahead JKM contact also rallied, increasing by 1% to settle at USD 6.94/MMBtu – its highest close since 17 February.

US gas benchmark Henry Hub continued to rally, increasing by 1.1% to close in the USD 2.6/MMBtu range for the first time since 12 March.

The European carbon price continued to rally, recording a 0.5% gain to close at EUR 41.95/tonne. 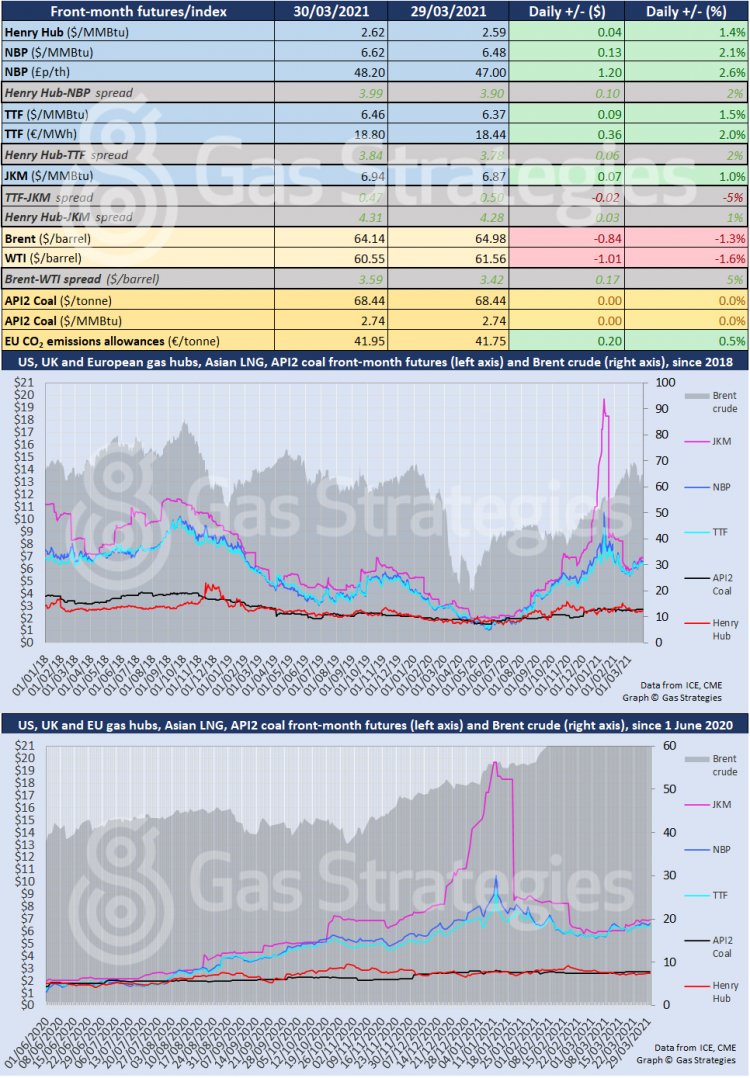