European natural gas prices surged on Wednesday and settled at a two-month high after Gazprom said it would cut available capacity on the Nord Stream 1 pipeline by 60% starting on Thursday morning.

The front-month TTF and NBP contracts closed 23.6% and 31.4% higher respectively on Wednesday to hit their highest level since early April. The UK gas benchmark stood at the equivalent of USD 31.09/MMBtu, with the Dutch marker settling at USD 36.64/MMBtu.

The rally was prompted by Gazprom announcing that it would reduce available capacity on the Nord Stream 1 pipeline by 60% on Thursday, citing the need to shut down another gas turbine at the  Portovaya compressor station.

Running parallel, Eni said Gazprom had reduced supplies to Italy by 15% on Wednesday, with the Italian firm stating that Russian firm had not provided a reason for the cut. Engie, Uniper, OMV and Chechia’s Cez have also said that Gazprom has reduced flows.

Across the pond, US gas benchmark Henry Hub staged a recovery after a strong loss on Tuesday – prompted by Freeport LNG announcing that the plant will not return to full operations until late 2022, following a fire at the facility last week.

The front-month Henry Hub contract settled 3.2% higher on Wednesday at USD 7.42/MMBtu, with the rally prompted by expectations of strong demand – both domestically, due to a heatwave, and globally, following Gazprom throttling flows to Europe.

As for Asian LNG marker JKM, the July contract settled 0.9% higher. The August contract did however record strong gains – up USD 6.17/MMBtu to settle at USD 33.9/MMBtu – as it looks increasingly likely that Europe will need more LNG in the weeks ahead if available capacity on NS1 remains at the current level or falls further. The pipeline will be out of action between 11-21 July due to annual maintenance.

As for crude, prices fell after the US Federal Reserve hiked interest rate by three quarters of a percentage point, marking the biggest rate rise since 1994. The increase has stoked crude demand concerns. 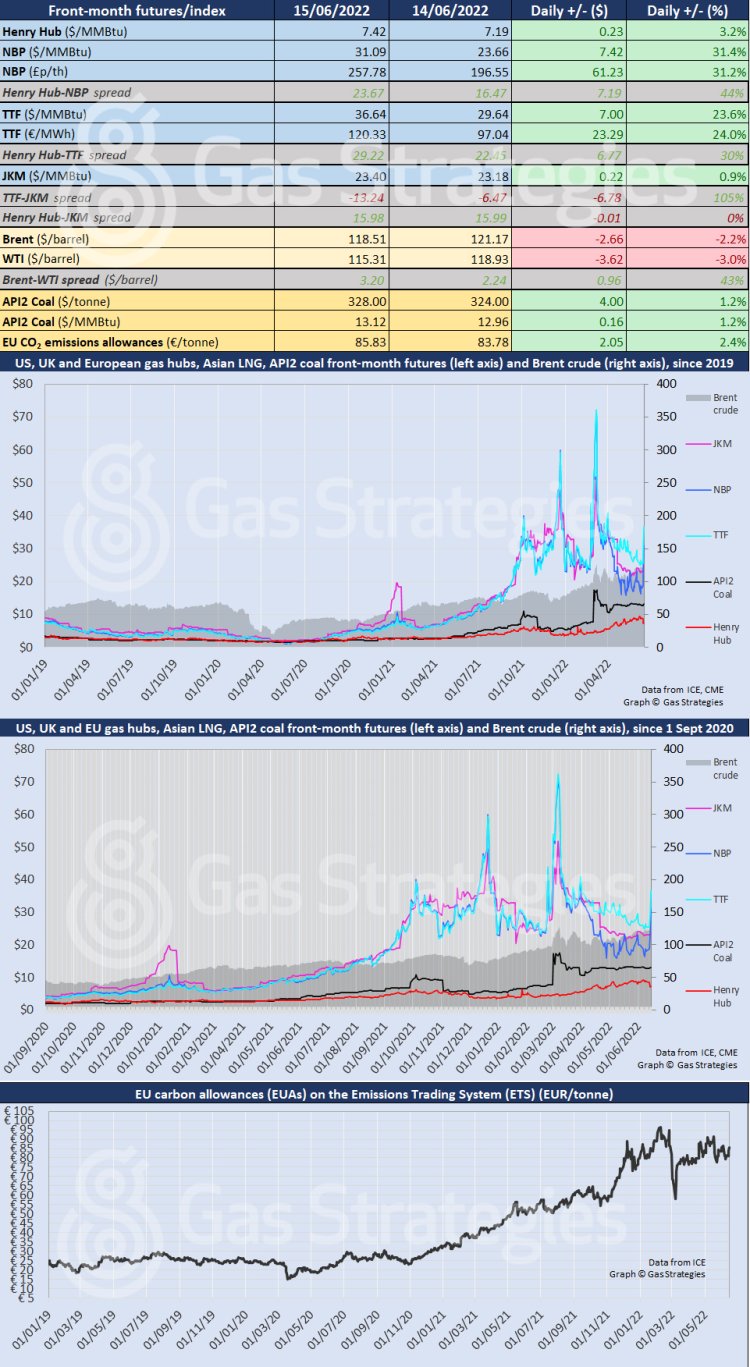