European gas prices soared on Tuesday after the Ukrainian transmission system operator failed to net any bids for interruptible capacity for May.

The rally was pinned on Ukrainian transmission system operator GTSO failing to net any bids for the 63.7 MMcm/d of interruptible capacity for May at Sudzha on the Russian-Ukrainian border.

Europe is currently experiencing high gas demand due to unseasonably cold weather, with gas storage on the continent still being called upon in what should now be the injection season.

Following the result of the auction, GTSO’s CEO Sergiy Makogon took to LinkedIn to suggest “geopolitics of energy” were “on display yet again”.

“Given the unusually cold spring, Europe's gas demand is high and the prices are going up. As a utility company, our role is to assure reliable deliveries, so Gas TSO of Ukraine has offered additional transit capacity at a monthly auction on Tuesday,” Makogon said on LinkedIn.

GTSO’s CEO quoted Interfax Ukraine, which said “consignors - which can only be Gazprom - are not interested in the offers of additional transit capacities”, with Makogon stating that the Russian firm opted not take up the additional capacity “even though the demand signals are quite clear”.

With Gazprom opting not to take up any further capacity via Ukraine, Europe may be more reliant on LNG imports over the coming month should cold weather persist. The auction result may also indicate Gazprom is confident that its Nord Stream 2 pipeline – running from Russia, across the Baltic Sea to Germany – will be operational this year, some market observers suggested.

The gas price rally helped lift both the European carbon price and Asian LNG marker JKM – as Europe may now be in line for more LNG.

The European carbon price surged to a fresh record high on Tuesday, with the May-dated contract on the EU ETS settling at EUR 47.2/tonne. The benchmark December 2021 contract settled at EUR 47.3/tonne.

In the US, gas benchmark Henry Hub settled at its highest since 3 March, with the marker closing 3% higher at USD 2.87/MMBtu on Tuesday.

Crude prices rallied on Tuesday after the Organization of the Petroleum Exporting Countries and its allies, collectively known as OPEC+ agreed to stick with plans to increase production from 1 May, despite rising Covid-19 cases in major oil importing nations including India and Japan.

At the meeting on Tuesday, OPEC+ also opted to scrap plans for a full ministerial meeting on Wednesday.

The front-month Brent and WTI contracts settled over 1% higher on Tuesday, with Brent returning to the USD 66/barrel range and WTI bouncing back to the USD 62/barrel range. 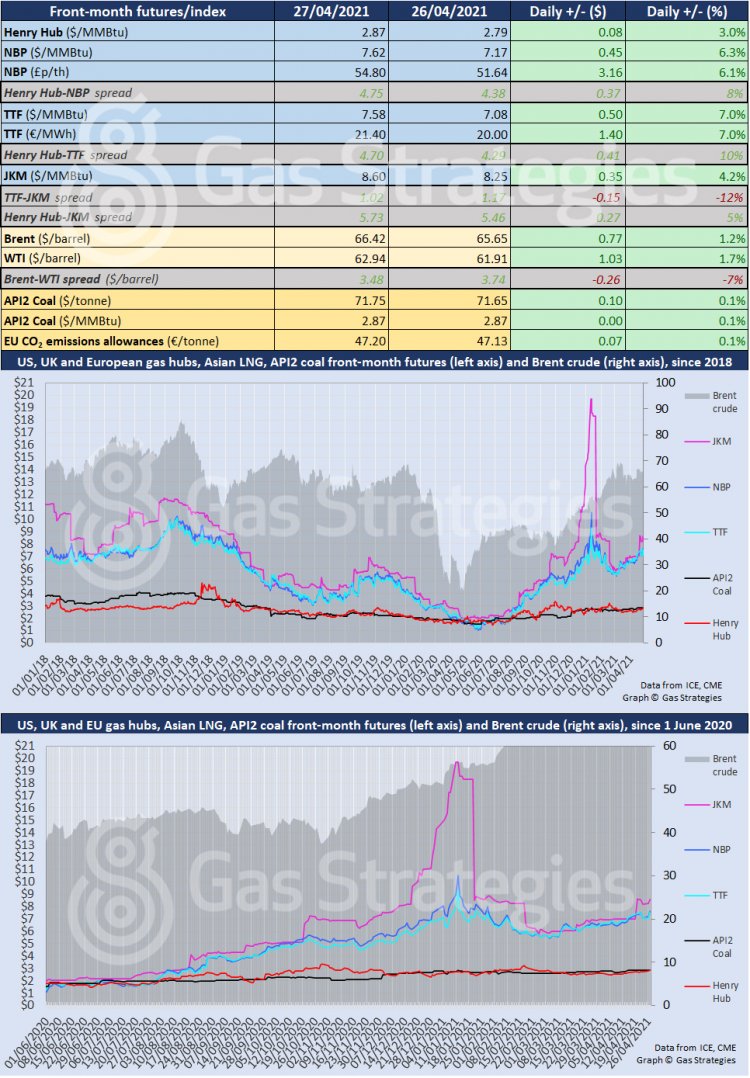