The Asian LNG spot price surged over the Christmas and New Year break amid frenzied winter buying. CME’s JKM futures contract, which serves as a financial hedging instrument against the Platts JKM benchmark, gained 36% between Christmas Eve and New Year’s Eve. The February-dated CME contract rose from USD 10.53/MMBtu on 23 December to USD 14.30/MMBtu on 31 December, producing a chart spike that mimicked the soaring price of Bitcoin over the same period.

European gas hubs also surged during the chilly festive period, with month-ahead UK NBP gaining 12% over the same timeframe to settle at the equivalent of USD 7.70/MMBtu and Dutch TTF rising by 9.6% to USD 6.85/MMBtu. Both prices represent a near-doubling of hub prices recorded this time last year, during a mild northern hemisphere winter.

Oil prices defended recent highs, with Brent remaining above the critical USD 50/barrel threshold and WTI creeping up to that price point in shallow pre-New Year trading. API2 coal has risen steadily from the equivalent of USD 2.64/MMBtu to USD 2.77/MMBtu on New Year’s Eve, highs not seen since April 2019.

The European carbon price surged to a series of fresh all-time highs over the past week, achieving EUR 33.29/tonne on 28 December before coming off these highs to settle at EUR 32.57/tonne on New Year’s Eve.

There was no commodity trading data published on 1 January due to the New Year break. 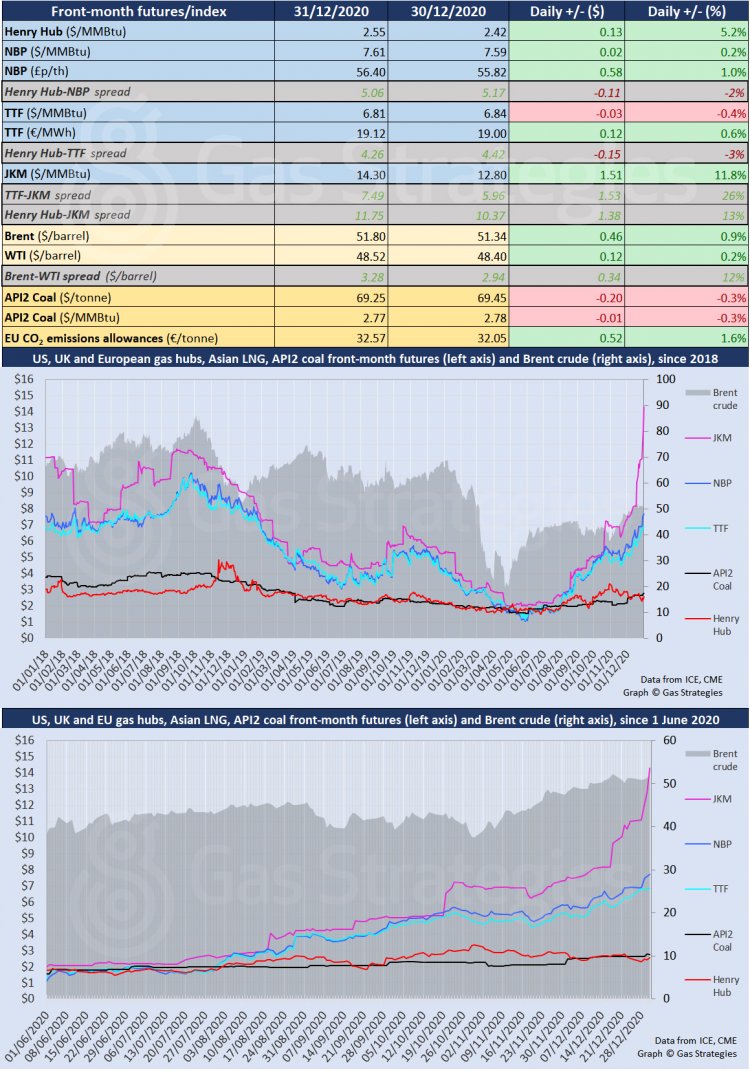