European gas prices hit a three-month high on Wednesday amid supply concerns following Gazprom’s decision not to bid for interruptible capacity via Ukraine for May.

The front-month NBP contract rallied by 0.4% and the month-ahead TTF contract recorded gains of 0.9%, with both settling at the equivalent of ~USD 7.65/MMBtu – a three-month high.

The rally was pinned on the market digesting Gazprom’s decision not to bid for any interruptible capacity offered by the Ukrainian transmission system operator GTSO in an auction on Tuesday.

Gazprom’s decision is likely to see more LNG arrive into Europe, with the decision by the Russian firm raising concerns over European gas storage levels, which are still being drawn from amid unseasonably cold weather.

The gas price rally helped lift the European carbon price to a fresh record high, with the May-dated contract on the EU ETS settling at EUR 47.69/tonne. The benchmark December 2021 contract settled at EUR 47.79/tonne.

As for JKM, the Asian LNG marker remained at USD 8.6/MMBtu on Wednesday, with the marker having rallied on Tuesday in response to TTF and NBP surging.

In the US, gas benchmark Henry Hub settled at a two-month high, closing at USD 2.93/MMBtu. The price rallied on record gas exports and a marginal decline in production. Unseasonably cold weather has also boosted residential gas demand, with gas storage reportedly being drawn for the first time in April since 2018.

Crude prices continued to rally on Wednesday amid bullish demand-side news. Refining capacity in the US increased to 85.4% last week – the highest level in a year, with US distillate inventories falling by 3.3 million barrels last week.

US crude inventories increased by 90,000 barrels last week to 493.1 million barrels, the US Energy Information Administration (EIA) reported, however the build was much smaller than the 659,000 barrel increase that analysts had expected, according to Reuters. 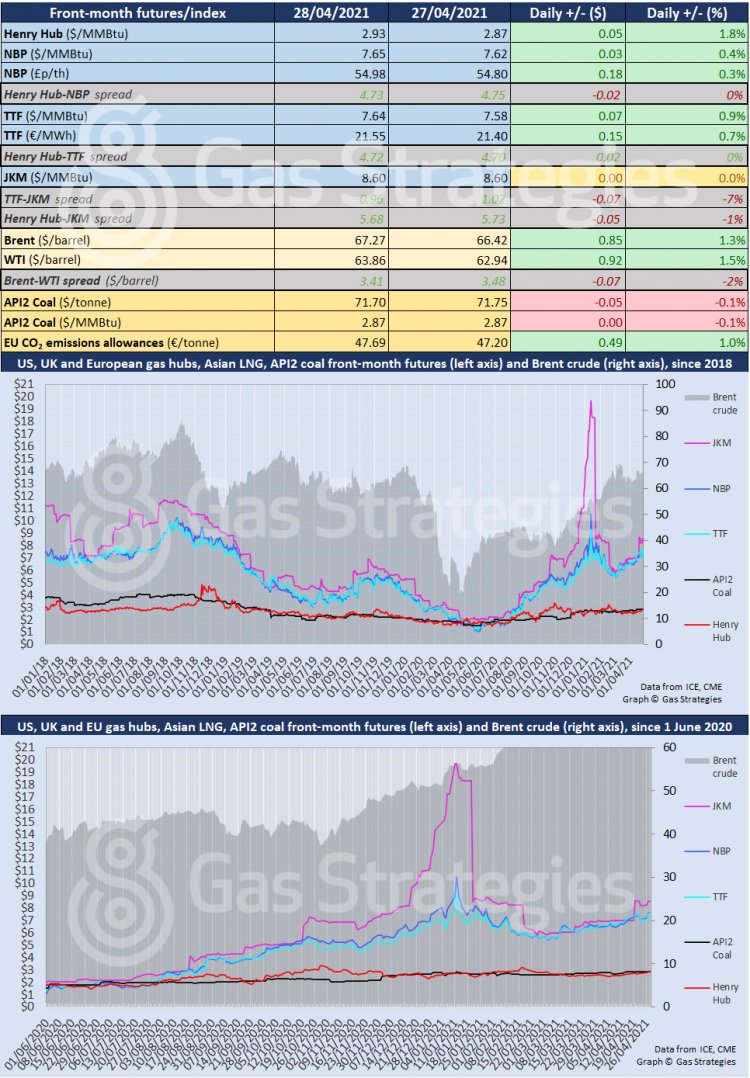