The WTI price has increased by ~6% since the start of October, with Brent up ~5.5% since the start of the month. Prices had dipped slightly last week after US energy secretary Jennifer Granholm suggested the government may tap into the nation’s strategic crude reserve to help lower petroleum prices, however the Biden administration is yet to do so.

The White House has called on OPEC to lift production further, however the oil cartel has brushed off the request, despite growing supply concerns as global demand is rebounding faster than anticipated from last year’s Covid-induced economic slump.

Whilst crude prices continued to rally, gas prices in Europe fell further as the sell off continued. There are signs of growing demand destruction in Europe due to prices hitting record highs in recent weeks.

This week Spanish steel maker Sidenor said it plans to stop production at one of its plants in Bilbao immediately for at least 20 days until 31 December.

The November-dated TTF and NBP contracts fell by over 2.5% to close at USD 28.90/MMBtu and USD 29.51/MMBtu, respectively. In Asia, spot LNG marker JKM closed 3.2% higher to settle at USD 33.08/MMBtu – extending its premium over the European gas benchmarks.

As for European coal, the API2 coal contract brushed off Friday’s loss to close 4.4% higher at USD 240.15/tonne. Demand for coal has increased due to record gas prices, with coal prices in Europe spiking further as China and India are looking to increase imports as heavy rainfall has impacted production in both nations.

The European carbon price rallied by 1.4% on Monday to close at EUR 59.11/tonne.

In the US, Henry Hub continued to fall amid improving gas inventory levels and mild weather. The front-month Henry Hub contract dipped by 4% to settle at USD 5.35/MMBtu. 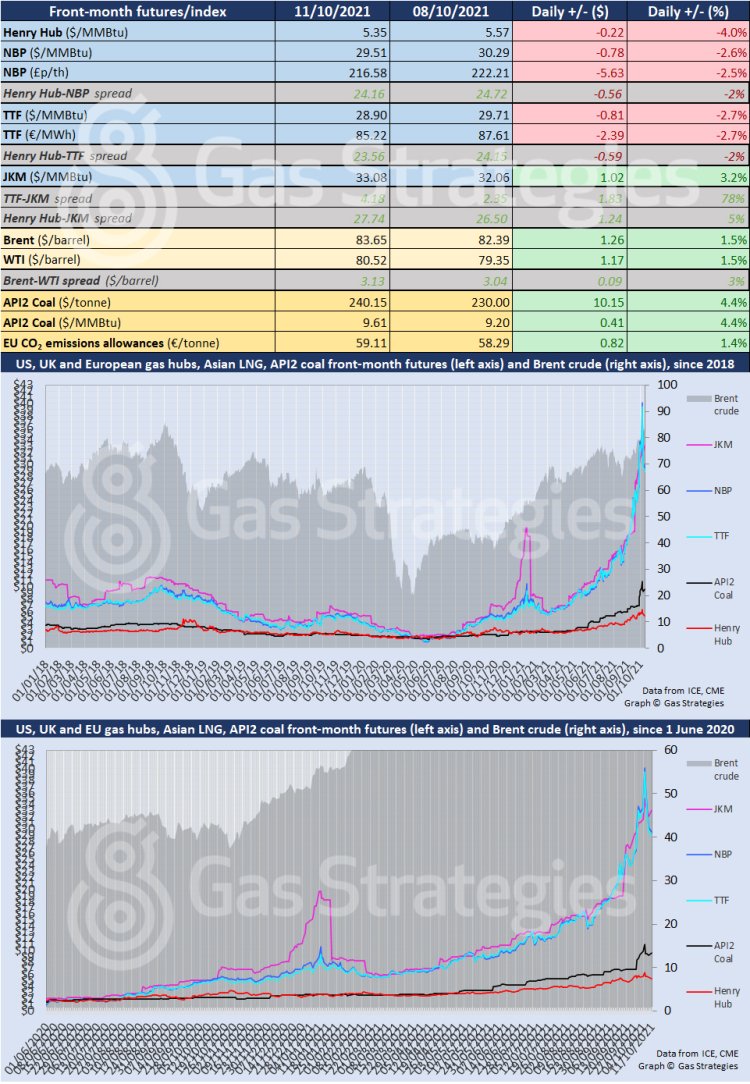