European gas prices raced to a fresh intraday high on Wednesday, however momentum fell later in the day despite news of a fire at National Grid’s IFA power interconnector, which has reduced power imports from France.

The front-month TTF and NBP contracts soared to a record intraday high of ~USD 27/MMBtu on Wednesday morning, with both benchmarks later dipping to settle at the equivalent of ~USD 24/MMBtu – a fresh record high.

Prices dipped from the record intraday high despite news of a fire at National Grid’s 2 GW capacity IFA power interconnector, running between the UK and France. The fire occurred in Kent, where the power cable links to a converter station. National Grid said the incident will reduce power imports from France by 1 GW until the end of March – adding to electricity supply concerns heading into winter.

The UK is now expected to ramp up gas-fired power generation to make up for the power import losses, however competition for supply is intensifying ahead of winter.

In addition to the fire, Gazprom CEO Alexey Miller announced the firm will not launch its Nord Stream 2 pipeline project on 1 October, with the announcement coming weeks after Gazprom’s head suggested first flows would occur next month. The announcement failed to have any real bearing on European prices as many market participants did not expect Gazprom to launch NS2 in October.

TTF and NBP extended their premium over Asian LNG marker JKM on Wednesday as gains by the European benchmarks outpaced gains by JKM. The spread on the October-dated contract currently stands at over USD 5/MMBtu, highlighting Europe’s attempt to attract more LNG. The October-dated JKM contract settled 0.4% higher on Wednesday at USD 19.02/MMBtu.

Gas prices could hit fresh highs on Wednesday as the market digests new of an outage at the Freeport LNG plant in Texas. Freeport reported on Tuesday that all three trains at the plant were down due to a power outage caused by Hurricane Nicholas. The trains were still offline on Wednesday, with feed gas volumes to the facility dropping considerable on Tuesday.

In the US, the front-month Henry Hub contract hit a fresh seven-year high amid concerns over gas storage levels heading into winter.

Production outages in the US Gulf of Mexico are weighing on storage concerns, with shut-ins still in place across the US GoM following Hurricane Ida which made landfall in Louisiana on 29 August.

Oil prices jumped on Wednesday amid a larger-than-expected draw down on US storage last week. 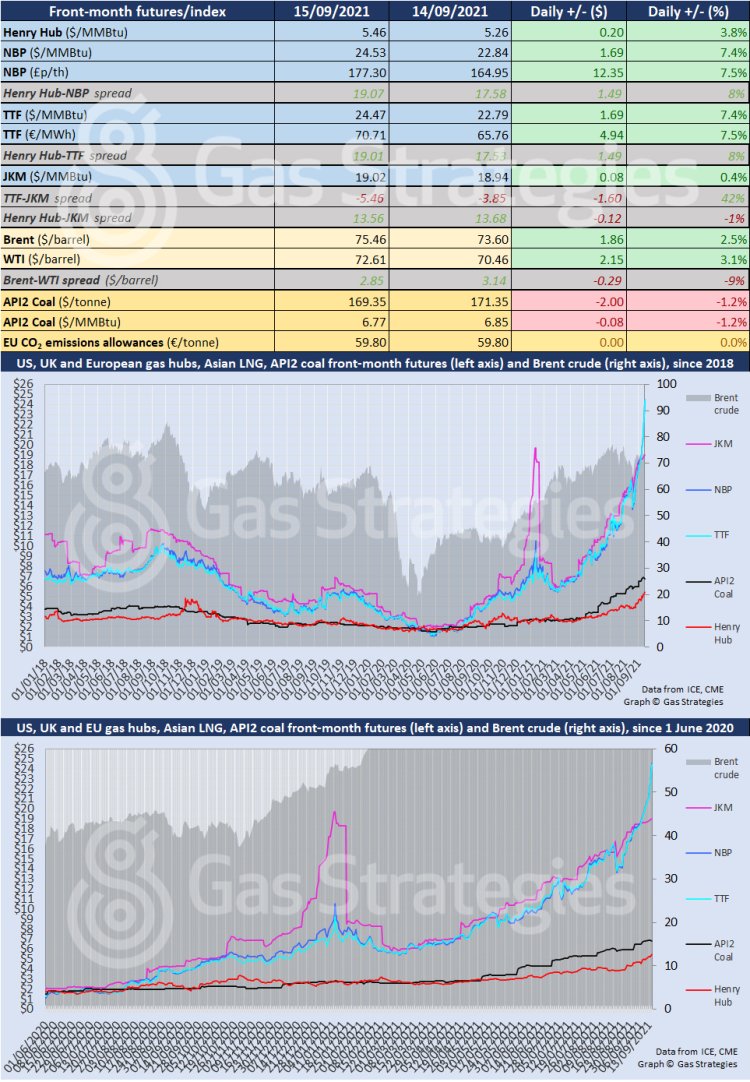